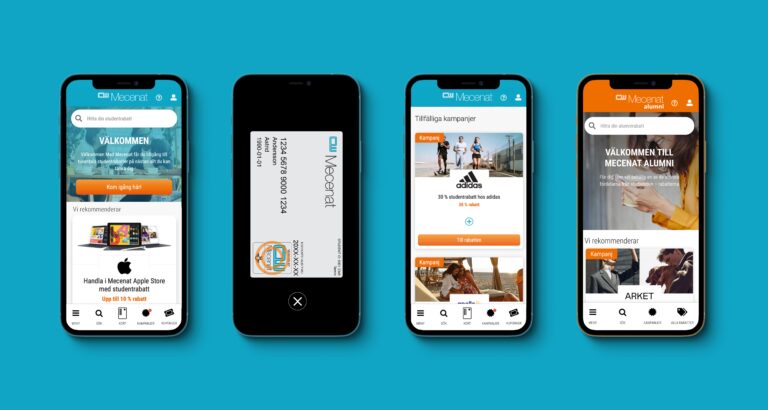 The Mecenat app exceeded three million downloads this week. A continual development of content and functionality has made the app a natural part in students’ everyday lives. The mobile surfing accounts for more than 90 percent of our visitors on the web where students can lower costs of their purchases.

When the Mecenat app was launched eleven years ago, it was a slightly odd complement to computer web surfing and the physical Mecenat card in plastic. But students are quick to adapt and start using new technology. In no time, a majority started using their phones when shopping with student discount online and confirming their status as a student with their digital card in the app.

Requested content and smart functionality were obvious reasons for the rapid success. Not long after the launch, the Mecenat app was nominated for “this year’s app rocket” by the magazine Mobil. It was also a role model when a large number of European youth organizations developed their apps. In 2016 it won prize at a European youth conference, according to the jury because it showed “great knowledge about young people and about the use of new technology”.

Students have always been at the front of development so it’s an exciting journey to match their needs and wishes. Mecenat have a close dialogue with them and listens to their input. The most important mission is to make it easier for them during their studies and as young professionals. That involves relevant and attractive discounts but also to offer new technology that can facilitate our services in a good way.

Another step on our way forward was when we in 2020 launched an app for Mecenat Alumni. It automatically provides our newly graduated students a new app where they can continue to take advantage of selected discounts when they are taking the first steps as young professionals.